Most people don’t sleep very well at high altitude and often report broken sleep, vivid dreams and not feeling well rested on waking. On any trekking, climbing or mountaineering trip at high altitude there are several factors that can influence how well you sleep. Cold (e.g. an inadequate sleeping bag or mat), noise (e.g. from a busy mountain hut), discomfort (e.g. an uneven surface or poor quality sleeping mat) and psychological stress are a few examples of things that play important parts in this.

Hypoxia (low blood oxygen) directly disturbs sleep by causing an irregular breathing pattern called periodic breathing. Altitude affects our deep sleep meaning that most of the night will be spent in light sleep. Overall this means the night’s sleep is of poorer quality than a night at sea level and the result is that you wake up not feeling refreshed.

Poor sleep is likely to impair judgment and lead to poor decision-making, which could impact safety of individuals or groups. It is also physically and psychologically draining to be sleep deprived and is likely to reduce success and enjoyment of the trip. Understanding how altitude effects sleep gives us the knowledge to try to improve it. 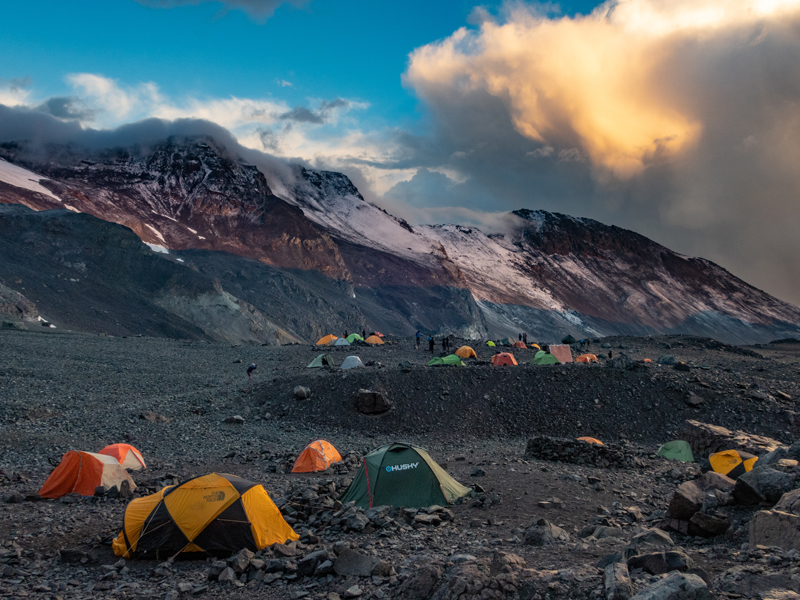 Periodic breathing is the name given to the breathing pattern that alternates between deep breathing and shallow breathing, as well as pauses in breathing. The pauses, called apnoeas, typically last up to 15 seconds although longer pauses are also seen. Sometimes following an episode of apnoea the person will gasp to take in a big breath, this can partially or fully wake them up from sleep and often disturbs sleeping companions as it can sound fairly alarming. During these apnoeic phases, our blood oxygen level and our heart rate decreases. Once breathing restarts, the oxygen level and heart rate rise again. The combination of hypoxia (low blood oxygen) which of itself can disturb sleep, and periodic breathing causing arousals or full awakening, leads to poor sleep at high altitude. Periodic breathing is common at high altitude and becomes more frequent as altitude increases.

How To Improve Sleep

The chances are, at high altitude you’re not going to sleep brilliantly, at least for the first few nights above 2800m. So with this in mind, for your best chances of a decent night sleep, it is important to optimise everything you have control over. Simple things can make a positive impact; here are some ideas that may help:

More specific to high altitude, it is important to know that periodic breathing reduces as we acclimatize. Therefore a gradual ascent to altitude, allowing adequate time for acclimatization, is key. If sleep disturbance is severe, it is best to consider descent. For those that particularly struggle with sleep at high altitude, the following medical options can be considered:

A Mountain Survival Story: an interview with Dr Luke Mueller